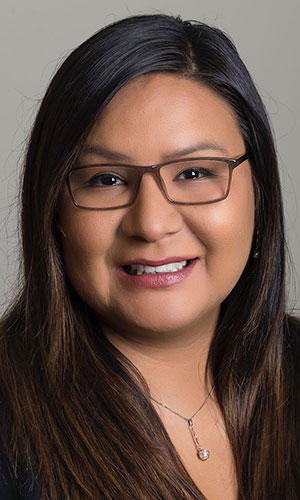 Karen Osachoff advises clients on Aboriginal/Treaty rights, as well as governance and employment issues and has represented clients at the Ontario Superior Court of Justice, the BC Provincial Supreme Court, as well as some administrative tribunals. She received her J.D. from the University of British Columbia and also has a Bachelor of Arts from Simon Fraser University.


Karen has worked for Nahwegahbow, Corbiere since 2011 but left briefly in 2018 to work for an Indigenous Child Wellness Agency. During her two years there, she gained experience in Child welfare, representing the Agency at the Ontario Superior Court of Justice and advocating for First Nations participation at every step of a child welfare case within the Canadian legal system.


Karen is Cree and Saulteaux from the Pasqua First Nation located in Treaty Four territory, also known as Southern Saskatchewan. In her spare time, Karen enjoys being with her family and travelling to sunny places.

Advocating for
Our Nations. First.

We provide services in the field of Aboriginal Law. In this regard, we act strictly for First Nations, First Nation Organizations and their members.

The Firm’s practice is restricted to Aboriginal rights law and acts for a variety of First Nations, Tribal Councils, First Nation organizations and their members.